Facebook as a business is extremely fast to respond to competition, and it continues to do so with Instagram’s latest feature. Called Remix, it’s an add-on to the Reels feature that allows users to record new Reels videos alongside Reels from other users. Duets are one of TikTok’s more popular features and is used primarily […] 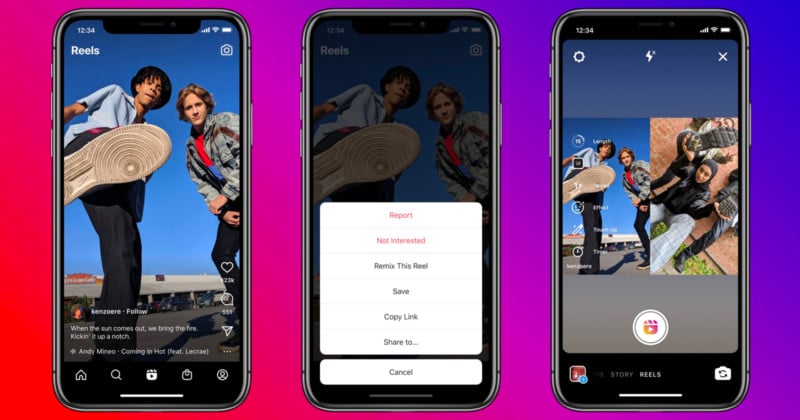 Facebook as a business is extremely fast to respond to competition, and it continues to do so with Instagram’s latest feature. Called Remix, it’s an add-on to the Reels feature that allows users to record new Reels videos alongside Reels from other users.

Duets are one of TikTok’s more popular features and is used primarily as a platform to host “reactions” to content posted by other users on the platform. Instagram Remix through Reels is basically a carbon-copy of that experience, which is one of TikTok’s most valued features. Some of the most popular content produced on TikTok are reactions or additions to videos uploaded by other creators, which adds a deep community feel to the platform and allows for organic engagement and expansion of content from a wide variety of users.

According to TechCrunch, Instagram’s Remix feature has been in public testing leading up to its launch on March 31, but it is officially rolling out to all users now.

Instagram started developing Remix around the same time that Snapchat was reportedly working on adding the feature. Snapchat has yet to launch it, but was apparently considering using the same name for its version.

To use the new Remix feature, users will tap the three-dot icon in a particular Reel and select the new option “Remix this Reel.” The view then splits to the original Reel and a user’s new one where a recording can be made side by side. After the new combined reel is recorded, users will be able to adjust other options like volume or adding a voiceover before publishing the new Remix.

More on how to use it ???? pic.twitter.com/IQaRtH4pUN

The feature is apparently not able to be used on older Reels and only newly-uploaded ones, which may limit the amount of classic content that can be toyed with via Instagram’s new Duets-knockoff.

The addition of Remix is just the latest in a long list of features Facebook has implemented within Instagram to address competition. Earlier in March, Instagram launched Live Rooms to compete with Clubhouse. Last August, the company added Reels to compete directly with TikTok just a month after it tested a feature to compete with GoFundMe. And of course, the wild success of Stories, which it added to compete with Snapchat, can’t be ignored as it became twice as popular as the feature it was designed to compete against.

Instagram may not have many new ideas, but it certainly knows how to provide new features found in competitor apps quickly to keep users coming back.

Finalists of the Bird Photographer of the Year 2021 Announced

Beware These Emails That Look Like Photo Copyright Takedown...

Interested In Developing Your Own Color Film? Here's a...

For many film photographers, processing color-negative film (C-41) is a bit of an...

An unusual situation has occurred on several occasions in the social media era,...

Following a complaint and subsequent review by the Advertising Standards Authority...