On Monday, March 15, 2021, a record-breaking sandstorm descended on northern China, engulfing cities including the Chinese capital, Beijing. In recent decades, northern China has suffered from sandstorms as a result of increasing desertification in the north of the country which is largely dry, arid, and covered with deserts. “Why is the sky orange?” I […]

On Monday, March 15, 2021, a record-breaking sandstorm descended on northern China, engulfing cities including the Chinese capital, Beijing. In recent decades, northern China has suffered from sandstorms as a result of increasing desertification in the north of the country which is largely dry, arid, and covered with deserts.

“Why is the sky orange?”

I pulled the sheets from around my eyes and looked at my daughter. “What do you mean?” I said.

“The sky. It’s orange,” she stated in a very matter-of-fact way.

I rolled over and pulled the curtain to one side. I peered through my half-awake eyes out onto the streets of Beijing which were shrouded by a distinctive orange haze. It was like the city had been dipped and soaked in a cup of English tea, leaving a sepia tone to everything that it had touched.

“I think it might be a sandstorm,” I said in surprise. She stood in silence and looked puzzled.

The confusion was understandable. The last time a sandstorm had descended on Beijing was well before she was born. It was the first time she, and many other children in Beijing, were waking up to the sight of orange sand-filled skies.

As a photographer, I did what you might expect I did. I went out immediately into the sandstorm to begin photographing.

For the past 15 years, my work has focused mainly on telling stories about the climate crisis and global environmental issues. Normally, I travel far and wide across the Asia-Pacific region to document these issues. This time, however, I was in the middle of an environmental crisis right in the city where I live.

As I ventured out into the sandstorm to begin making pictures, I began to reflect on the last time I had photographed a sandstorm in China. In 2009, I embarked on a six-week overland journey traveling from Beijing to the far west of the country to document the problems China was facing due to increasing desertification.

Desertification is the conversion of arable and habitable regions into either deserts or arid land. It’s caused by a myriad of factors including climate change, inappropriate agricultural practices, and water mismanagement. It often results in the creation of more dry and degraded land which is prime territory for the creation of sandstorms. During this journey, I photographed many sandstorms as I made my way through some of the country’s worst-hit regions. 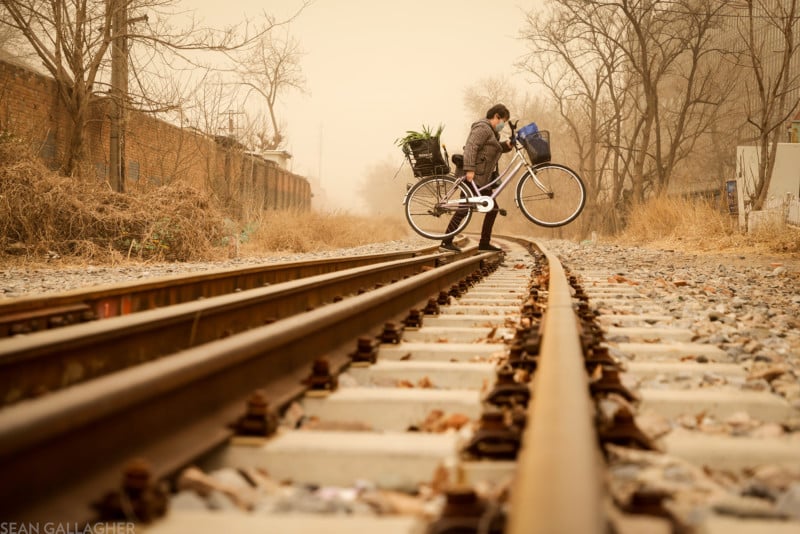 Over a quarter of China’s northern and western regions are covered with desert and/or arid land, so sandstorms have long been a problem in the north of the country. While they continue to plague those remote regions of China, Beijing has suffered fewer in the past decade, largely due to aggressive reforestation efforts near the capital. This month’s sandstorm, however, was a clear reminder that sandstorms are still a threat to this region.

The winds were high as I made my way out into the morning rush hour. Particles of dust and sand were being whipped through the trees at high speed, lashing the pedestrians shuffling along the street trying to make their way to work. Masks covered people’s faces and coats were drawn over heads, as people tried their best to shield themselves from the orange windy onslaught.

Making pictures in these conditions is difficult. The first thing you notice is the sand and dust getting into your eyes. Within minutes it feels like you are peering through eyelids tinged with abrasive edges that dry your eyes with every blink.

The sandstorm was loaded with harmful particulates, mainly classified as PM10 (less than 10 μm in size) and PM2.5 (less than 2.5 μm in size). Sand makes up the former and dust makes up the latter. It’s the PM2.5 particulates you really need to worry about because they are small enough to get deep into your lungs. As such, a heavy-duty air filter mask is mandatory in these conditions. 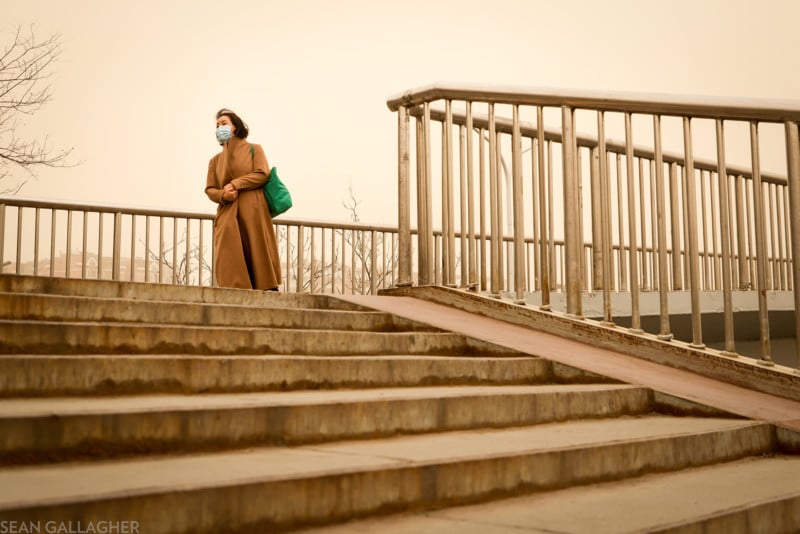 When out in it, you also notice that your camera quickly develops a fine layer of sand and dust on its surface. Changing lenses is almost out of the question, as the fear of that dust getting into the camera, where it may not be able to be cleaned out, is too great.

I plowed on through the storm. Commuters were either rushing to get to work or rushing to get out of the storm, so most ignored me as I lingered in interesting places and try to make images of them.

I tried to get low so that I could frame the full extent of the orange sky in the pictures. The sun barely peeked through the sand and dust, as I positioned figures in my pictures in an attempt to show the relationship between people and this dystopian environment that had befallen the city. 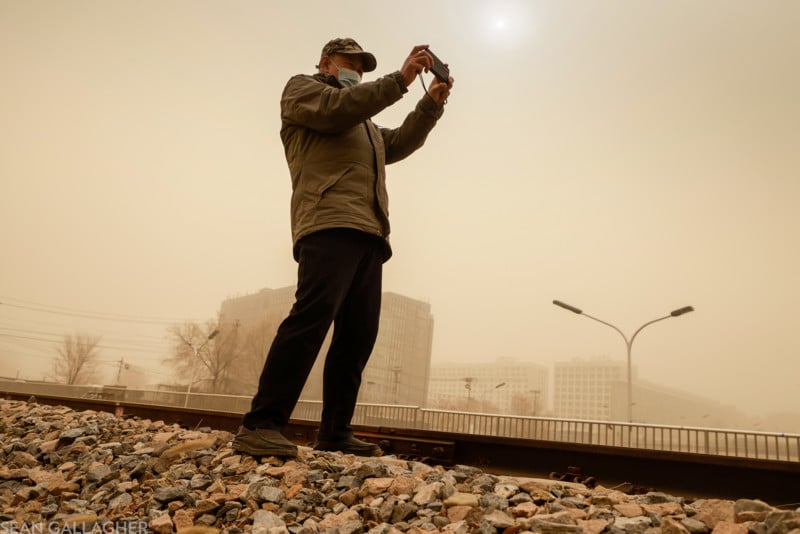 I lasted about two and half hours before I felt I had spent long enough in the sandstorm. The conditions had become wearying and I felt I had made enough pictures that captured the feeling of being within it.

The pictures here, along with the video above, show you what it is like to experience this extreme weather event. Desertification is an environmental issue that isn’t covered much in the mainstream news but extreme sandstorm events like this remind us that it is a constant threat. It’s also not just an issue that faces China. Deserts are expanding across the world and as our planet warms, it’s an issue that will be facing many more of us in the future.

About the author: Sean Gallagher is an independent photographer and documentary filmmaker. Originally from the UK, he has been based in the Asia-Pacific region for over 15 years covering issues surrounding the climate crisis and global environmental crises. He is a Fellow of the Royal Geographical Society and his work has on environmental issues has appeared with National Geographic, The Guardian, and Smithsonian Magazine. For more from Sean, you can follow him on Instagram.

Against the Sun: Five Tips To Get Better Results From Complicated Situations

Playful Illusions Made from Household Objects

Here’s an overview of the new features, improvements, and bug fixes included in...