Picking the wrong camera lens can lead to unintended consequences in your resulting photos. Case in point: this new photo of President Joe Biden and First Lady Jill Biden meeting with former president Jimmy Carter and former first lady Rosalynn Carter. As soon as The Carter Center published the photo yesterday of the meeting at […] 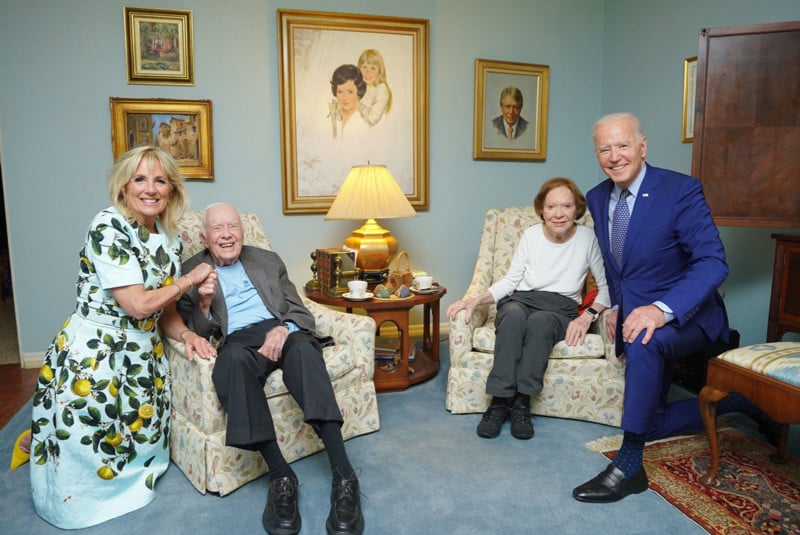 As soon as The Carter Center published the photo yesterday of the meeting at the Carter home in Georgia last week, people began pointing out how tiny Mr. and Mrs. Carter looked next to the Bidens, who looked like giants in a miniature house by comparison.

Why do The Carter’s look like miniatures?! They are amazing wonderful people ????????The proportions here are off somehow. Who else agrees?!

Adorable! But am I the only one who thinks this looks like a tiny doll museum, and Joe and Jill are giants?

No, the photo wasn’t Photoshopped. Instead, the strange look is due to an optical illusion caused by the wide lens’ distortion.

Both Joe and Jill Biden are closer to their camera than Jimmy and Rosalynn Carter, who are further back in the armchairs. And because of how wide-angle the shot was, objects closer to the camera appear to be much larger than objects (even slightly) further away.

You can see how dramatic the distortion effect is by looking at Jimmy Carter’s feet, which are on the same plane as the Bidens — they look enormous compared to the size of the rest of his body.

“When taking photos in a smaller space you often don’t have room to move far enough back to get everyone in the frame, so you use a lens that can take it all in,” Guardian picture editor Carly Earl writes. “Unfortunately, if you use a lens that is really wide, while also standing very close to the subjects, it will distort the photo, making those close to the camera appear giant while shrinking those further away.”

Here's a quick example of removing the extreme lens distortion. A wide angle lens causes everything on the outer edges of the image to expand, and center to contract — the small room made a wide angle lens necessary. pic.twitter.com/L9rVS5Xx0U

The opposite happens when you use a telephoto lens on the other side of the spectrum: instead of making objects at different distances from the camera appear to be dramatically different sizes, it compresses space and makes faraway objects look much closer in size as nearer ones.

An example of this compression was that controversial news photo of a California beach published in mid-2020 that appeared to show beachgoers ignoring social distancing guidelines and packing close together — other views of the beach shot from closer range and from a helicopter news camera told a very different story.

Sometimes using a wide lens can’t be avoided when you’re shooting in a cramped space, but the optical illusion in this photo could likely have been avoided by moving the Bidens back to be on the same plane as the Carters.

6 Great Tips to Improve the Compositions in Your Portraits

Is Fujifilm’s Color Science Really as Good as They Say?

WildArt Photographer of the Year Unveils its ‘Space’ Contest...

WildArt Photographer of the Year Unveils Winners of its...

The Differences Between DSLR and Mirrorless Cameras and...

No doubt, the industry is quickly moving toward a fully mirrorless age, but that...

Landscape pro and RPS assessor David Clapp explains his approach when it comes to...

Photographer and self-professed weird lens guru Mathieu Stern is back with another...