Iceland’s Eruption and the Northern Lights Captured in One Photo

A photographer captured an extremely rare moment that shows the Northern Lights above the recent volcanic eruption in Iceland in just a single exposure. The recent volcanic activity in Geldingadalir, Iceland, has provided not just photographers and filmmakers with spectacular imagery and videos but has also given local nature enthusiasts an opportunity to access and […] 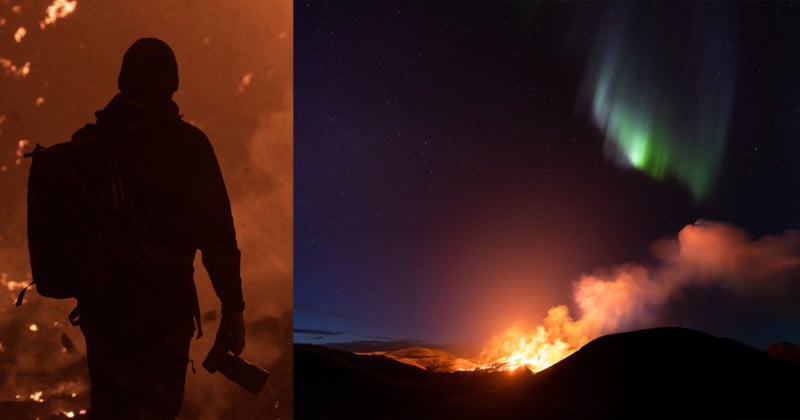 A photographer captured an extremely rare moment that shows the Northern Lights above the recent volcanic eruption in Iceland in just a single exposure.

The recent volcanic activity in Geldingadalir, Iceland, has provided not just photographers and filmmakers with spectacular imagery and videos but has also given local nature enthusiasts an opportunity to access and experience this wonder of nature up-close and personal, which was documented in a short film, “Volcano for the People” recently.

The eruption has been closely documented from many angles at this point, however, photographer Jeroen Van Nieuwenhove has still managed to create something extraordinary by capturing the aurora borealis, more commonly known as Northern Lights, as it appeared over the site.

The Northern Lights are a natural phenomenon that is born out of disturbances in the magnetosphere and is caused by the solar wind, resulting in a light spectacle of varying colors with, generally, a predominantly green glow.

Van Nieuwenhove wasn’t sure if the opportunity for photographing northern lights would arise, especially because of the expansive cloud coverage that has dominated the sky during the last several weeks of the eruption. At this point in the spring, each day continues to get longer and Van Nieuwenhove was concerned that the opportunity to photograph the Northern Lights was evaporating due to the lack of darkness.

Luckily, one day all of the right shooting conditions came together. Upon arrival, Van Nieuwenhove recalls that the weather conditions weren’t pleasant and featured low temperatures and strong harsh wind.

“In true Icelandic fashion, the weather went from hail to sun to snow and back to the sun,” he recalls. “Once the sun set, the whole area was covered again with clouds and, due to the cold, I had decided to call it a day. Sitting down while waiting in the harsh and freezing wind made my body temperature drop and I felt it was not worth it.”

However, on the way back, the clouds vanished and a clear sky appeared and along with it, a faint aurora formed right above the photographer. Van Nieuwenhove explains that he decided to wait because once the aurora is already overhead, even though minimal, the activity of the aurora has the potential to be strong. After half an hour, the northern lights picked up and, as Van Nieuwenhove says, “started dancing above” and began to move closer towards the sky above the eruption.

Not wasting the opportunity, Van Nieuwenhove took shot after shot in succession, just in case the Lights would perfectly appear in the right location, and eventually, they did.

“The aurora moved into the right spot and I was just awestruck,” he says. “This is such a rare occurrence, to have an active eruption and the northern lights all in one experience!”

Van Nieuwenhove’s previous experience photographing northern lights contributed to determining when the right conditions would occur, which also meant that his camera was correctly set up and ready to go when the time came. However, this time the lava provided a powerful light source, unlike the usual dark environment when photographing aurora, which meant that a long exposure shot was out of the question.

It was crucial for Van Nieuwenhove to photograph this scene in one shot, instead of taking multiple exposures, and with his Canon EOS R6 and Canon EF 16-35mm f/2.8L III, he created the shot he was looking for using a 1.3-second exposure, at f/2.8, and ISO 3,200 at the wide 16mm end of his lens.

Van Nieuwenhove also noted that he almost chose not to go out that night due to the possibility that cloud coverage would once again ruin his plans, however, as his friend reminds him of the famous quote, “you miss 100% of the shots you don’t take.” Clearly, his decision to persevere was the right one. 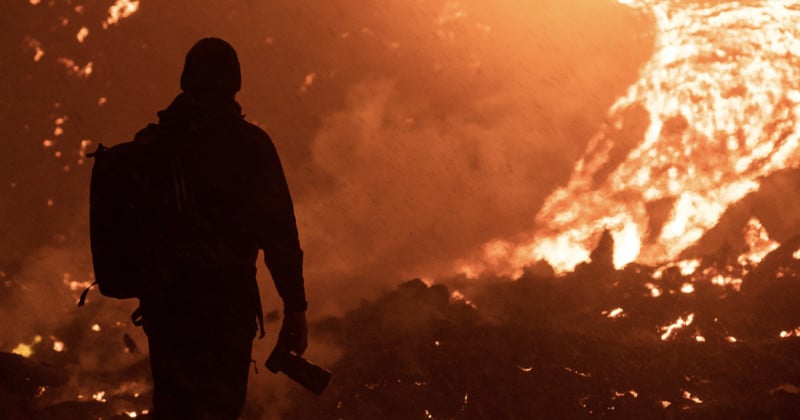 Image credits: All images by Jeroen Van Nieuwenhove and used with permission.

Photos Deserve the Digital Protections That Are Standard...

Why You Should Upgrade Your Speedlight to a Studio Strobe

How Black People in the 19th Century Used Photography as...

How Astronomers Use Gravity as the Ultimate Camera Lens

The Hubble Space Telescope has an incredible camera system in its own right, but...

The United States Government Has Lifted its Ban on Xiaomi:...

The United States government has reportedly agreed to lift a Trump-era ban on Chinese...

Asus has announced the Zenfone 8 and 8 Flip smartphones which feature similar camera...

Moment has always been the front runners with regards to developing tools and lenses...